When I worked at a gas station a few minutes from my house through high school, I was never allowed to sit. Even if I was ringing things up at the cash register, something that could just as easily be done on top of a stool as on my feet, even during the long stretches when we didn’t have any customers, the most respite I could get was to lean on the counter, which was, of course, discouraged.

I think there was a single chair in the entire place. And while most museums and galleries aren’t in such a dire state, trying to find a seat has, generally, gotten significantly harder, especially in modern and contemporary art spaces. When they’re provided, usually in front of a video piece so spare and lengthy it’s already enough of a punishment in itself, they’re extremely basic, often backless benches. The museum has its origins in private studies and collections, the studiolo, the wunderkammer, where the private individual enjoying their collection would almost certainly be seated, and further, that historically benches and couches have been provided to encourage lingering and seated contemplation. Exhibitions in this context still had a disciplinary function, but were also seen as providing a positive form of alternative leisure to the uncultivated mass.

A consequence of the increasingly spare white cube model, a model which accelerates the circulation of art objects as interchangeable commodities, has also been that seating in commercial and contemporary gallery spaces has become increasingly minimal (uncomfortable), as to not “interfere” with the work. Reesa Greenberg notes that even when seating reappears, it is often tucked into the hallways or accompanied by texts about the works on display, rather than offering a comfortable and appropriate spot to look at the art. This trend comes alongside the transition, with the rise of modernist attitudes towards the function of art, from experiencing art as pleasure to engaging with art as work, and the good visitor being one that displays appropriate gallery work ethic. Standing to read long texts explicating the work on display and walking around it moves the gallery visit closer to labor, and anything that contributes to the pleasurable reception of something is implicitly marginalized as lowbrow. (Like bringing a bag of cheeseballs to a screening of Stalker, which I definitely did not do…)

Removing seating removes relaxation, physical recuperation, the material reality of a human visitor, from the gallery. And so, the visitor doesn’t stay. What could be an elongated contemplation of a work instead becomes a passing glance as the visitor walks from piece to piece, never stopping long. This has interesting consequences for displaying videogames. Unlike fine art, now connected to ideas of self-cultivation and work to “get it,” videogames are still seen as more straightforward entertainment products. They often valued by how many hours you can sink into them, rather than if anything can be pulled out. And, of course, with the exception of arcade cabinets we generally play them at home, in our rooms, lounging in front of the TV, even in bed, usually alone.

When I started looking a videogame exhibitions, I mainly looked at major traveling exhibitions from the 2010s on. In essence, I was wondering why they all sort of looked like E3, a tradeshow style of exhibition, rather than taking on the exhibition forms used in the rest of the gallery. E3 is the land of the kiosk, where lines and crowds are the norm and taking in a quick demo of upcoming games on your feet is seen as the most efficient way to circulate people through the space. The kiosk is meant to provide a taste and then encourage the player to move on, presumably towards a purchase given how this display method has also cropped up in Wal-Marts and Gamestops. 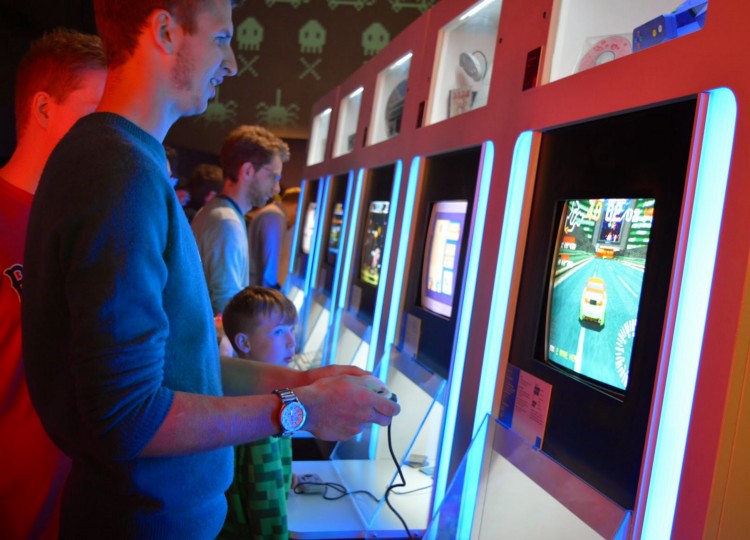 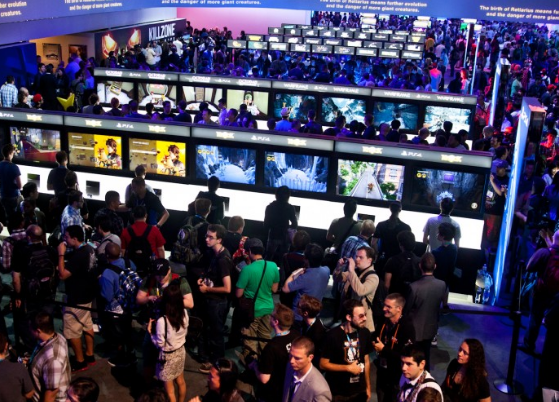 But a museum isn’t selling anything. Or, at least, you aren’t picking up what’s on display and taking it to a cash register on the way out, though often miniatures and reproductions abound in the gift shop. However, just like the white cube gallery space presented a perfect environment for scrutinizing de-placed vessels of capital circulation as work, as self-cultivation, expo-like videogame exhibitions blend consumption with the existing disciplinary structure of the museum, designed to cultivate aesthetic appreciation. The nostalgic tug of these often chronologically organized shows steer the visitor in the direction of that history’s culmination, current gen consoles.

“Seriousness” seems to be the great insecurity of games as a medium and industry for some reason, and many arguments towards these shows are premised on some sort of lack of (deserved) recognition, usually citing how popular, how iconic, how much money the industry makes, the technical advances and how convincingly sad the dads can look now. The location of the art gallery or museum collection is,within this argument, a rubber stamp of approval. Just as the gallery space fills the art object with monetary value while also presenting it as mobile and ownable in the white cube gallery, it’s expected to pour cultural clout (and hey, probably more money as well) into these games.

So circulating efficiently through the gallery space, whether it is displaying oil paintings or game systems attached to screens, seems to be the end goal of most modern exhibition design and makes the visit more about a tour of the space that creates value and the proof of its discernment than contemplation of the objects on display. Of course this is something videogames, as an industry, is very interested in. When even engaging with games in your own time, at your own house, can become more work-like, not to mention the general trend of work becoming more and more integrated with “free” time, presenting art and games in a way that also makes them a sort of work edges out opportunities for free or critical engagement in light of these issues.

The much-hated Documenta X installation of net art had seating, but ended up feeling like an office. Not to mention the work was also not connected to the capital-I Internet, instead using a local network. Rather than work with the isolated white cube, a format which circulates cooperative works of value, net art didn’t fit, and the effect flopped. Removed from the luxurious architecture and material that house and make up fine art, the banal, work like environment was overwhelming, and the exhibition couldn’t keep up the charade of being totally-not-work under these conditions. 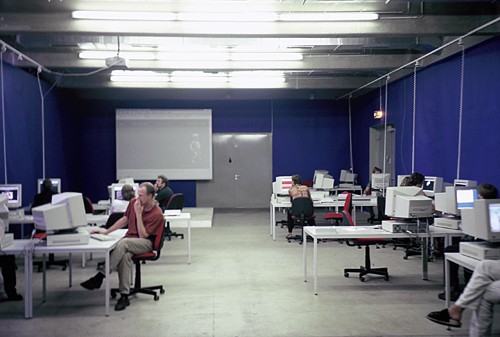 Another early show of videogames, SHIFT-CTRL, took a different approach. Many of the monitors for the games were in custom housings that sat on the floor, in the middle of a large carpet where visitors could sit down and gather. While not the most comfortable or accessible type of seating, the installation did consider both the function of spectatorship in exhibitions of interactive art, as well as the leisure context people were likely to engage with games in, and probably allowed for longer, deeper encounters with the object of the exhibition, whether you were holding the controller or not.

Of course there’s no one right way. For works that are thematically appropriate to present as a work site, thoughtfully utilizing those exhibition techniques may be really effective. The problem arises when these approaches are an unconscious default, the sort of thing that’s not seen as an “interesting display choice” that can be fruitfully interrogated.