A few weeks ago I marked the anniversary of a particularly shameful incident in the history of indie games, if we define that history as beginning with a sudden influx of venture capital and resulting cultural expectations in parts of the online hobbyist and amateur videogame scene. I’m of course talking about the removal of Dong Nguyen’s Flappy Bird from the App Store. This was a choice Nguyen made himself, due to an early instance of the now inevitable-seeming pattern of mass online harassment from riled-up gamers. This was also enabled by games press who, despite publishing their own evidence to the contrary, argued that the game was some kind of ripoff or infringement on The Great Nintendo, and also too hard, and probably stupid as well.

I don't expect mainstream gaming sites to NOT do major IP holders’ dirty work for them, from railing against the supposed derivativeness of Flappy Bird to concluding that labor abuses are simply what’s necessary if you want the most detailed plant textures. Videogame “news and reviews” has always served as a sort of PR arm for the AAA studios while occasionally flexing its star-making power over “the rest.” The two examples I mention show even attempts to be critical or produce more progressive takes can serve these ends.

There were few people who were on Flappy Bird’s side when this was going down. Even among people involved in the indie games scene, the general vibe seemed to be that of course, the harassment was unacceptable, but if Nguyen didn’t DIRECTLY ripoff Nintendo sprites, it wasn’t original or interesting or “good” enough, really, like it was just finicky and hard and you only did one thing and, did you know it was making $50,000 a day on banner ads? In hindsight, this response seems more based in insecurity and protectiveness over a specific cultural idea of “quality,” how to appropriately use the videogame medium, in a way, than actually speaking from experience playing the game.

I still have Flappy Bird on my phone! I’m horrible at it and have never broken 12 points, but it’s one of those things, like a favorite pen or coffee mug, that has value in how it feels good to use in a non-ostentatious way. The banner ads were unobtrusive, the loops quick, restarting instantaneous, and the trancey rhythm of one-handed tapping perfect but also a bit dangerous for killing time on a bus ride. (You know I mean it in this case because I usually would rather get struck by lightning than talk about videogames like this.) There’s a weird purity to this free app that does what it does and doesn’t ask for further microtransactions, or feature ads that take over the whole screen, or push gambling-based elements. Almost no one stood up for it. (But maybe being preserved by the V&A will give it the last laugh?)

Dong Nguyen has gone on to develop other mobile games that iterate on the bright, chunky graphics and one-tap control style of Flappy Bird, like Swing Copters and Ninja Spinki Challenges. I’m glad he wasn’t deterred by the over-the-top reaction to making a popular, retro-styled, challenging, reflex-based game when, based on several hailed indie successes of the time, that was THE way to be a serious indie dev, wasn’t it?

Despite this, the figure of Flappy Bird transcends its status as a moment in its creator’s career. The response to Flappy Bird seems like a debt unpaid that hangs over indie games as we wring our hands due to the apparent end to the moment of indie games capitalization that presented the narrative of “rewarding the worthy.” What did we do to deserve this? (This being lootboxes, this being poor “discoverability,” this being race to the bottom prices, this being toil unrewarded, this being the indignity of “shovelware” and “asset flips,” this being everything about Steam… etc).

Why have I been thinking Flappy Bird yet again? On his personal forum for his latest project Jason Rohrer, one of the first wave-riders of systems-oriented retro-styled games gaining cultural clout, describes a situation that has parallels with the reception of Flappy Bird. To summarize, the code and assets for One Hour Life are public domain, those who are paying $20 for Rohrer’s version are actually paying for access to his server, a specific iteration of the game. An adaptation, titled One Hour Life For Mobile, which makes the game available on mobile markets like the App Store and TapTap, became as popular or possibly more popular… and suddenly the work’s public domain status being confusing to players or the mobile adaptation being misrepresentative of Rohrer’s “original” work or intentions becomes an issue in a way it wasn’t for remixes or mods, even a case of “fraud.”

In the post Rohrer demonstrates how he’s exerted significant email-based effort trying to get the mobile developers to use specific wordings (and even layouts!) for how he wishes to be acknowledged in this version. The issue is he has no legal grounds to do this. All the material in question is public domain, meaning anyone can use it without rules about attribution or commercialization. (This is what a CC license would have provided, and, based on the “concerns” he describes in the emails, would have avoided this issue). The material belongs to the public. To demand the mobile devs cede ground here (and otherwise threaten vague charges of “slander” or “libel”) is to erode the social benefit provided by the public domain that Rohrer claims to be eagerly taking part of. Only slightly, but still.

I also think it’s revealing to consider why this instance is the one an indie dev who benefited from the combination of cultural interest and capital that initiated first world tech industry adjacent “indie games” around 2008 or so would take issue with. The same anxieties about ownership, originality, quality, the “proper” use of videogames, rear their heads again.

Rohrer states that he didn’t use a CC license because “If someone is remixing, I don't want to burden them with a credit requirement, or force them to include the text of the license, or whatever.” The perceived ability to “remix” or “mod” a cultural object creatively is much more likely to be granted to white, boy-genius type creators, because this is an idea native to the western art market and the ideas about cultural ownership and originality that sustain it. Seeing a mobile port as not especially “creative” or “misrepresenting” the original work is already a type of value judgement about what sort of games and game-related labor are potentially creative.

Rohrer’s concerns seem to be exacerbated by the mobile port specifically hitting the Chinese market, as well. Chinese markets are portrayed as specifically shady, Chinese players specifically oblivious to “where the game came from.” In his blog post about the fate of Flappy Bird, Robert Yang focuses on the perception of Dong Nguyen and developers like him as, similarly, specifically undeserving of success, stating “The reasoning is that no one "outside of games" can become so successful, except through deceit. The derivative nature of Flappy Bird's assets and mechanics was taken as confirmation that technologically-backward Southeast Asians were "at it again" -- stealing and cloning hard-won "innovation in games" invented by more-beloved developers.”

While Vietnam is more marginal to the mainstream videogame industry than China, which has gained a lot of ground both producing its own games and creating many of the complex and detailed assets that make AAA games stand out, a large number of continental Asian countries remain subject to the perception that their cultural products are “cheap” and “ripped off” in a way that doesn’t apply to condoned, corporate controlled markets in the US, Western Europe and Japan. That places like Vietnam and China (as well as South American countries like Argentina) seem to have such a sizeable “bootleg culture” makes their culture appear inherently derivative and illicit. Yet, in the case of software, Graeme Kirkpatrick notes that the idea of “piracy” was constructed by nascent software publishers and magazines to present games as a closed commodity, contradicting the free-flowing copying and re-use of code which was vital to early computing cultures.

Piracy is an idea entangled with how the software industry developed in the first world, which was then hegemonically exported, along with the associated videogame culture, to these countries. A dubious “gift” that locals are expected to accept on preset terms. This idea of certain privileged economies “giving” culture, rather than culture always being something to remix and re-use is invoked by Rohrer in the final email quoted in the post: “You should be grateful that I placed it in the public domain, which allowed you to achieve the commercial success that you're achieving (and will continue to achieve in China), and you should be eager to explain the truth of the situation to everyone---not debating with me about wording.”

The idea of the “gift” persists in other ways videogame companies have responded to piracy in supposedly benevolent ways which only serve to shut down or control the special affordances of copying and sharing. Nintendo responded to modding and fangames first with lawsuits and then with Mario Maker, an official environment for fans to pursue the same urges enabled by things like the Hello Mario Engine. The official release trailer for RPGMaker 2000 likewise gives a cutesy shoutout to the same software cracker who was sent a cease and desist letter for patching and distributing an English language version of their product and making it… wildly popular. The lesson is clear, if someone outside of the expected demographics for audiences or creators of games wants to make their own thing, it has to be on these already-set terms.

In the blog post quoted above, Robert Yang wonders if Flappy Bird will end up completely forgotten, an obscure example for a few game studies academics to invoke, or a touchstone in videogame culture and history. I feel like the academic now, but I think it’s wiser for everyone to consider it a touchstone, because the questions it raised keep emerging again. Why is an entire mobile port of a videogame for an Asian market not as “creative” as what we would call a “mod” or “remix?” Why are green pipes in Flappy Bird a “ripoff” while in other indies it’s “homage?” The core of these questions are issues of who is allowed to be a creator in indie games, who is allowed to profit from these games, who uses the ability to make a videogame properly. And until we make penance for our gut reactions to Flappy Bird, its ghost will keep returning. 👻 ooooOOOOooooOooooooo… 👻 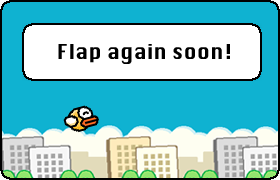 Above: the image that appears instead of a download link on the page for Flappy Bird