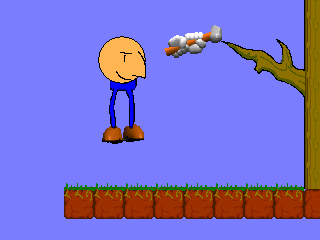 Most of the discussion of Bennett Foddy’s new game, Getting Over It, maps approximately to how his work’s been discussed before, focusing on the wacky physics toy nature of it and its punishing difficulty. Less likely to come up, though it’s a prominent point in the in-game narration that accompanies your voyage up (and down, and down) the mountain of stuff that makes up the game’s setting, is exactly what all this stuff is. While some are his own models, many of the 3D objects that make up Getting Over It are made by others and imported. Foddy has also been pretty scrupulous about crediting the inspiration behind Getting Over It in discussions of the game, a 2007 game by freeware dev Jazzuo called Sexy Hiking. In this case, the occasionally jarring combination of clip art and found images to make up the game is even more apparent, as the simple, 2D face of the hiker is orbited by a low-poly representation of white-gloved hands clutching a hammer.

I feel like the reason this really interesting element of process and end aesthetic result isn’t talked about in the more mainstream game press interviews that have covered the game has something to do with the ire aimed at the “asset flip game,” which seems to come up as a new acceptable target for trashing after the demands to get rid of twine games, visual novels, trash games, alt games, art games, and various other “non game” things that for whatever reason are uploaded to platforms for selling games became too obviously reactionary in demographic. A lot of people I follow on Twitter who favor all of these other categories are really concerned about “asset flip games.” And maybe it’s not deliberate, not consciously saying “oh well if we talk about combining a bunch of assets together that will come across as being negative about a game that everyone is really enjoying,” but more a delineation that happens prior to even thinking about how the game is made… if I like this game, if Bennett Foddy made it, if it’s distributed in the Humble Bundle, etc. etc., then it’s implicitly excluded from even being considered “asset flip.”

Trying to come up with a stable definition of “asset flip” is harder than coming up with a stable definition of porn, in my opinion, because it’s inherently tied to the invisibility of process that goes into mainstream games which we all take for granted in essentially the same way as the invisible processes that go into constructing desire itself, except AAA games’ processes are also protected by byzantine DRM, proprietary software and IP law. The general feeling behind the term when people use it is that if they don’t like it, if it blocks their view of the games they already know they want to see, if it doesn’t present a certain aesthetic or live up to standards of visual coherency or polish set by international corporations, and/or if it doesn’t demonstrate a charged essence of “originality” or “intentionality” or “effort” that is shaped by primarily western, english-speaking world biases and presumptions about IP, piracy, and bootlegs as specifically located phenomena, then it is asset flip.

This kind of abandons the formal arguments which defined at least the public premise of ousting the previous genres of work — they were not really games because A Game Must Have (x, y, z) — but the underlying tension remains the same. Even if it’s less about formal definitions of Games As Such now, and we’ve come to be remarkably tolerant of visual novels and so on because they can be mined for techniques to make fuckable AAA characters seem marginally more human-like, mass products a smidgen less alienating, the fixation is still on games as a market, the image of games as a desirable cultural product, and who has access to shaping the nature of that desire and who can profit off of it. And in general the anxiety about asset flip games circles around how they are antithetical to the desires the Videogame Consumer is primed for.

Valve’s recent announcement re: Steam moderation that it will continue to mostly do nothing and occasionally arbitrarily decide to intercede from the shadows which is, essentially, what it has always been doing and so not really a particularly comforting or shocking decision, has been met with insistence that they have to do something, and of course about games that are essentially hate speech I agree (and Valve sitting on its collective hands about confronting hate speech on its platform for so long has made sure that just weeding out the games that feature it and not the multiple aspects of the community that do as well won’t change much about the experience of using Steam either... I digress) but the idea of doing something about asset flip games makes me just wonder… what exactly?

“Asset flip” is an unstable category so defined by both subjective taste and attachment to the idea of videogames as an aspirational category that I don’t just think it’s impossible to reliably enforce deleting these games or whatever, I also think we stand to lose a lot from considering them garbage to be cast off of videogames as a category, and not largely representative of what videogames are.

OikOS, by David Kanaga, like Getting Over It, is in the aesthetic genre of games in which the digitally mediated overabundance of online asset stores, stock photo clearinghouses and public domain archives is explicated in visual chaos and incongruity. Kanaga further explicates the labor of these asset makers, crediting each along with its cost in the game itself (See also Pippin Barr’s vr3), and conceptualizing the generic 3D models of dogs he was able to “pay” as workers. Someone is always doing the work somewhere so these pieces can snap together, whether they are distributed around the world or bound to a single project that will emerge into the world a unified whole (and this whole may be credited to a “producer” or “director” but is more likely to just be associated with the name of the publisher or company that releases it). Further, Kanaga made use of a tool set developed by Fernando Ramallo (who has also made a tool for animating and drawing directly into Unity, Doodle Studio 95) which allowed him to place 3D models, behaviors, and sound events in Unity directly. Kanaga’s work is open about these facts of its production, which is what makes OikOS so interesting, but as controversy about “visible genitalia” on two year old outsourced character models in PUBG demonstrates, the production and circulation of modular parts that can be popped in and out of games is the constant undercurrent of videogames as a form, right now.

When people say “assets” they usually mean fairly generic 3D models, made in the image (as mankind to God…) of the protagonists and NPCs and items and environments of aspirational videogames, but anything can function as an “asset” in the sense that it can be copied and shared between projects. Code is isolated for its function, copied and shared almost as a matter of fact, and videogames can also appropriate and circulate 2D art, sounds, visual effects, and so on in the same way as these more explicitly labeled “assets.” For example, BlueberrySoft’s The Milkmaid uses Unity to let you clamber around a 3D model of the Vermeer painting of the same name, with the typical WASD-mouse controls. The model used is from a different artist who applied the textures of the public domain, high resolution image onto the 3D shapes of the woman featured in the portrait and her surrounding environment. The digital allows anything to become an asset, and function as an asset on multiple levels.

An asset can even be more than a digital file of some sort that is copied between game makers and games, in practice it can extend to a concept. Pipes in Flappy Bird, for example, are described as “ripped” even though they are demonstrably not the same image as the one used to represent pipes in the cited Mario games, yet when the same thing appears in several beloved prestige indie titles, it’s a loving homage, an engagement with the form’s history and conventions, bla bla bla… well, which is it, though? Coming back to the jarring, low poly white-gloved hands of the hiker in Sexy Hiking, aren’t they weirdly evocative of Mario as well? Where did they come from? It becomes obvious, as it is also in music and writing and art to varying degrees, that who gets to copy as artistic statement, loving homage, or commentary on form and whose copying is seen as bootleg, inauthentic, “ripped,” lazy, operates significantly along lines by which one belongs to an in-group (gender, nationality, gamer cred etc).

The line between engine and asset also blurs when you notice there are subtleties of feel and aesthetic that result from something being made in Flash, versus Macromedia Director, versus Construct, versus Unity… even if you don’t see the guts of the files you have a feeling of how what you are seeing was made after a while, and you can also begin to develop a craft appreciation for the process going into these things, like how painting or pottery can be enjoyable in themselves. In fact, “asset flipping” is not new or recent, but it just seems like a reiteration on a broader scale of complaints about “Unity Horror Games” like Pizza Delivery intruding into the horror genre and mostly spurred on by the new accessibility of making walking-sim style games. The plot of this one is taken from a Tamil movie, the characters and objects from aesthetically disjointed sources, but it is still something more than the sum of all these things.

The idea of Intellectual Property rarely meaningfully protects or cites the vast majority of people who contribute to culture (Flappy Bird is in the permanent collection of the V&A, after all), and instead favors consolidating the most profitable forms of culture at major international companies, who are most able to navigate and wield these laws (as well as the clout and financial resources that acting on an infraction usually requires). Digital media, and even older reproducible forms absolutely resist this line of control, which is why IP and DRM becomes more and more constructed as a prominent concern as media becomes increasingly reproducible and speedy.

I’ve talked about how the multi-media-ness of digital games is a part of “willfulness” as a medium in a way that goes against the commonsensical nostalgic history of clean, minimalist pixel art games, but this kind of modular copying that makes videogames themselves is also inherently there, as much as polish or industry pipelines try to make it invisible and seamless, and stamp down on unauthorized or overly brazen expressions of this copying. It’s a huge horizon of potential that points to what videogames can uniquely be as a medium that has nothing to do with “systems” or “game feel” or “interesting choices.”

“Asset flip” games are often also called “cheap copies” of established popular games or genres. But in a digital context what is a cheap copy? A ripoff designer bag can lack the polished look of an authentic bag, but in the end they exist and circulate because they still hold your stuff. And these cheap videogames are still videogames, sometimes overwhelmingly so, to the point where we wish they would be more like the ways film or design or perfectly balanced equations manifest in the games we’re primed to want, so that we would know how to want them.