Home > Writing Portfolio > The Writing Jam Rolls On! What we found in the Lost Histories jam

I felt really nervous about doing another game writing jam this year, after the Visual Essay Jam in 2017 and the Manifesto Jam in 2018. For one, it snuck up on me a bit. Suddenly it was late January and people were asking if I’d do one this year, too. Additionally, I thought the idea for this year was a bit more complicated than previous years, it was less a specific writing format to explore and more a topic, and one that could be interpreted broadly at that, and people seem to enjoy it more when they’re given a task over a topic. Historical research is, as a concept, pretty intimidating and not something most people think they’re equipped or qualified to do! And finally, there was frankly such a huge amount of attention/entries for Manifesto Jam which I knew was probably not replicable… I kind of dreaded getting no submissions at all.

Fortunately we got 18 submissions and all of them definitely represent what I was hoping for when I decided to propose this theme. ON TOP OF THAT many pushed the format and scope of their work beyond what I could have imagined!

This week Laine Nooney tweeted an interesting point about how we frame the ephemerality of videogame history that I’d like to preface my roundup of the entries by addressing: 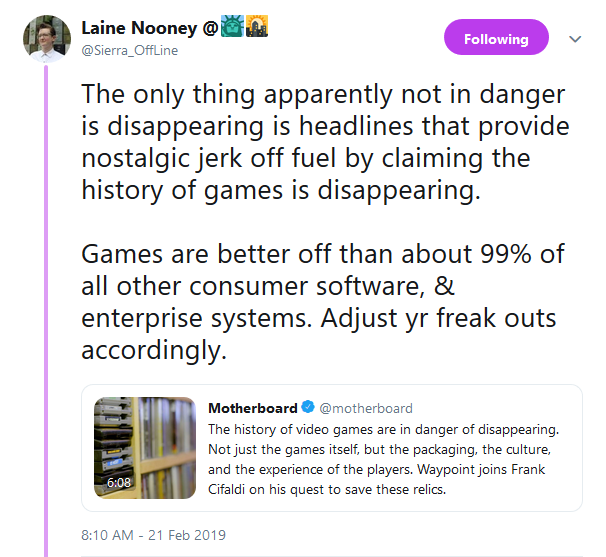 I don’t disagree here, but the point about “software” is something to pay attention to. I think my wanting to propose this jam topic came from the same sort of malaise at how, on the one hand, we’re constantly told that videogames are a shiny new medium that haven’t been properly historicized and preserved and canonized yet, on the other hand the History of Videogames seems incredibly rigid, the canon very real, and all of it extremely boring and with very little overlap to many people’s own experiences. I was hoping to get entries which would reflect what was intriguing and enticing to me about using a computer (and playing videogames secondarily) during my childhood which influenced me to study videogames more deeply… if not with the same cultural touchpoints I was hoping to at least get people to think about similarly compelling experiences, for them.

I don’t think it’s a coincidence that, referring back to Nooney’s tweet, that many of the things that people brought up in their entries are in a vague area between videogames and software. In my entry I discuss things like the Windows 95 Maze Screensaver, and time-killing games that were bundled with operating systems like Skii Free and Rattler Race. I also touch on MindMaze, a minigame included in the Encarta Encyclopedia CD-ROM sets. Neopets is not only a collection of a variety of flash and html-based games, but an imaginary world you move through, the social systems and economies players participate in, and, on top of all that, the resources the site offered for players to create their own pet pages and adventure stories. Even the way I played more straightforwardly game-y things was to disassemble them to an extent and play with the parts in a less game-y way, like my liberal use of cheat codes in SimCopter.

While all these things are variously playful elements of software that people used recreationally on computers (what a mouthful!), they’re not what jumps to mind when people talk about videogames, or even subcultural or independent videogame production. That this ended up being a common theme in almost all of the submissions was really exciting to me. During in-person discussions I’ve often hinted that my position is that videogames are more interestingly like software then they are like games… maybe seeing the category of “software people really don’t consider “games” per se but which I still played with and enjoyed at formative points of my life” (lol) have such prominence in the histories people thought were overlooked but influential in their own experiences, memories and tastes will lead me to more formally stake out that argument…

And now, for your consideration, a round-up of the 18 excellent entries in the Lost Histories Jam:

Shadsy published The Mario Fangame Myth, which digs deep into the history, social dynamics and increasingly self-referential in-jokes of a specific Mario fan game community, re-entering a space once left behind in high school.

Candle, similarly, charts a course from toy computers and primary school computer rooms to creative computing like RPGMaker and early 00s game development, reflecting on how they intersected with more formalized game development and computing education.

Fotocopiadora’s submission aesino combines imagery, sound and a poetic personal narrative to recreate the experience of absorbing videogames throughout your childhood.

Rumpel’s zine In the beginning we all played Family reflects on childhood gaming experiences too, but through the lens of how pirated and modded videogames and consoles created a unique history of videogames in Argentina, that isn’t reflected in institutional videogame history.

Florence Smith Nicholls also contributed a zine which discusses Rayman 2 (one of the many, many Mario competitor sequels that seem forgotten now!) specifically through the lens of playing with a friend.

Snoozysoft shares some fuzzy memories of childhood educational, shareware and strategy games. This piece really captures the feeling of trying to explain the baffling systems and abstractions of a videogame to someone who never played it!

Andromaeda’s submission highlights something I was completely unaware of, an obscure music making software distributed to children and teens via cereal boxes! Plus it takes the form of an album to listen to.

Nilson created a personal art gallery in RPGMaker to present a set of Dragon Warrior rom hacks that embrace sexual themes. While they can be sometimes gross, juvenile, or problematic, Nilson demonstrates how these mods can also lead us to think more deeply about the structure of videogames and their depiction of sex and relationships.

In this visually rich submission, Niall Moody has made a multimedia essay about Amiga intros which adopts the same visual styles and effects Amiga programmers once used to show off their skills.

HistoryHowWePlay’s piece problematizes the assumption that a lot of videogame histories fail to question, that technical progress is not always what players want. Instead, this essay asserts that 3D graphics, rather than a desired feature, was, for many, unintuitive and challenging, and caused a demographic shift which persists in game marketing.

Thecatamites offers a history of the RPGMaker forum community by defining a collection of its many eccentricities...

Spinnylights writes about the history of a forgotten Macintosh Shareware giant. Even if you don’t recognize the name Ambrosia Software, if you encountered a Macintosh computer at your school, work, or friend’s house during the 90s, you’ve probably played one of their games!

I have to be honest, I don’t own a copy of Half Life 2 and so was unable to check out these custom maps by Voec. Maybe someone who likes to stream Half Life levels could do a commentary run on these? The premise is intriguing, revisiting a past mental landscape by invoking its digital landmarks...

Finally, Ebeth contributed to the jam by emulating and running a livestream of a classic and influential pet simulator! While no hexing was done live, the best (and worst) of Petz customization sites are visited during the stream, and we also had a bit of fun with the custom music box feature.

Thanks to everyone who participated! I love how these works are all personal but also reveal something important, and how they take on such variety, and I hope the jam encourages a wider perspective on videogame history in the future. :)