Home > Writing Portfolio > Only You

New media, speaking generally, not about the specific set of recent and not-so-recent technological forms that are described under the ambiguous umbrella term New Media Art but about simply a medium that is new, almost always disrupt existing production of and relationships to culture. The inventors of oil paints, canvas panels, and tin tubes of pre-mixed paint, all of which contributed to the portability of a form which had previously been something commissioned for a specific context or physical location were probably not thinking of the ritualistic atmosphere and obscene price figures that permeate Soetheby’s auctions, but they each represent pivotal moments in the creation of the current art market. The portable oil painting created the art object as we commonly know it, a unique object, defined by authenticity and provenance, that accrues value based on this and could be exchanged.

Early in its history, the experienced “master” of the workshop was a guarantee of quality, rather than what he would gradually become, the creative force that determined the style and subject matter of the work, increasingly working outside of a patron’s specific needs as the functions of interior decor, homewares and so on, were filled by production methods able to make more uniform and distributed “quality objects.” The name of the artist comes to represent a traceable point in the object’s authenticity, as well as a part of a narrative when placed alongside the artists’ other works about originality and creativity. But then artists began using emergent production processes in their work.

In the case of digital new media, the chaos created when artists began using it was not unlike the previous crises around photography, mass printing techniques, or the conceptual art strategy of making works that can be constructed by instruction. The art market eventually found a way to absorb these initially counter-techniques into its process of determining and preserving value. Even if the work itself is immaterial or multiple, documentation, infamy, or ostentation can still become markers of value. Where the information about the work is what is valuable, work is institutionalized through its circulability, McKenzie Wark argues.

Digital works, while in theory infinitely replicable with no cost to produce a copy beyond what you are copying it to, can become grounded in institutionalized systems in several ways. Proprietary cartridge technology added an extra hurdle where other games could be copied on floppy discs or tapes, luxurious prints and artists’ editions of born digital works become the valued collector’s items, and now, various types of DRM attempt to ensure that even someone who has purchased a digital piece of media or software can only use it in approved contexts, condoned and controlled circulation. “Owning” a copy of a film, or a song, or a game has become a negotiation of these hurdles, and with the increased presence of biometric scanners in our everyday life (your iPhone now knows your face and your fingerprint) the future of games that only play for you is getting closer. (Similarly forthcoming will also be, of course, increasingly creative ways of evading this future.)

The most elaborate DRM techniques are applied mainstream software that multi-million dollar companies can distribute on popular online marketplaces, like Steam, a vast authentication tool in itself. Individual creators who don’t fit this criteria are both more hurt by and more susceptible to others distributing their game for free but, at the same time, there is a strong counter-cultural element of smaller developers offering their projects for free to begin with or at least without DRM, on sites like GOG or itch.io. DRM is set up in a way that prioritizes protecting the IP and profits of corporations, but it’s poison to both individual access and historical preservation. Yet, not everyone wants to (or can afford) giving away their labor for free.

Is there an alternative where small developers can call back to the idea of the single, authentic object to resist both the tyranny of DRM and actually, rightfully, get paid for their effort? 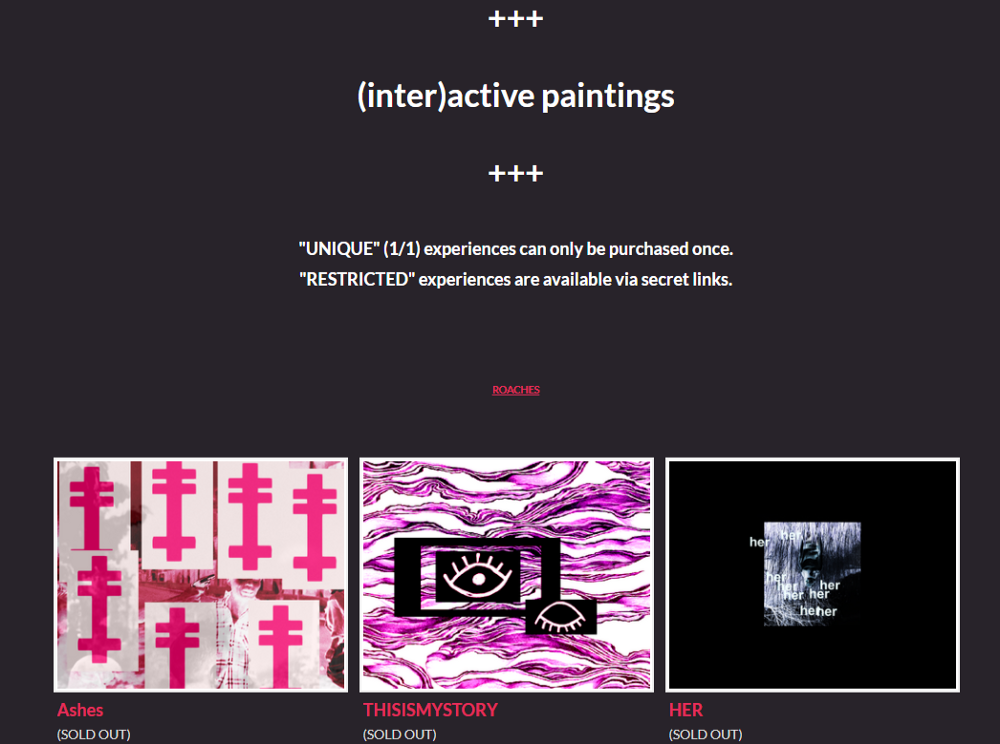 FUCKGAMEDEV releases (inter)active paintings on his itch.io pagethat are either accessed through secret URLs, or can only be downloaded once. Most of the games currently on his page are essentially inaccessible. The only ones currently for sale as of writing are called “dreamcatcher,” which will run you 16 euros, and “the life of a beepfish” which goes for 230 euros.

Either price is still, all things considered, fairly cheap for total control over a unique piece of art. However, the contents of the games are deliberately left mysterious, and combined with market norms that strongly devalue experimental games by lone developers, making a payment implies a certain leap of faith, or perhaps this just makes it more visible.

“There is only one copy available.

You can do whatever you want with the experience once you bought it, even copy or destroy it. It’s none of my business.”

This is the description that accompanies every unique experience listed on the page. For a while, “dreamcatcher” and “the life of a beepfish” were the only games available on the page, both admittedly a bit outside of my fairly meager gaming budget; I don’t have a monthly budget for unique art objects. (Maybe I should?)

I decided to wait and purchase the next game that was available. There were a few false starts, a few I wasn’t fast enough on, but one evening I was consulting my laptop while also stirring a curry I was cooking in the small kitchen of my flat when I saw I had an itch.io email. FUCKGAMEDEV had uploaded a new “unique experience,” so naturally, I went in. I made the purchase through the itch.io store page, knowing that new copies of the game would be pulled from sale as soon as the transaction was completed. I decided to tip a bit extra because it was starting to feel somewhat like a commission, or a personal service situation in its exclusivity, its one-to-oneness, and these are both situations where it’s often appropriate to tip. Then I was able to download the .zip file containing the game from the page. Presumably I will be the only person who can do this.

I let the file sit in my downloads folder for a few days. I didn’t know what to expect, and while I like games that surprise me, I also like it when I can trace a lineage of influences, or of development of a single creator’s style. I was excited for Everything is Going to Be OK and Dujanah because of my enthusiasm about Jack King-Spooner and Nathalie Lawhead’s past work. Just what have I invited into my laptop this time? But eventually, not knowing what I was in for, how long it would take, anything really, I unzipped the folder, opened the application file.

People say three minutes is the perfect length of a pop song. I estimated how long I thought THISISMYSTORY was, from clicking on the icon to the game closing itself, and estimated 3 minutes, which ended up being a bit generous but pretty close to spot-on.

And I don’t know how much more I want to disclose about the experience itself. Like it says on the itch.io page, I’m free to do whatever I want with the files now, but I am the only person they’ve been passed to in this way. Some people have redistributed them, notably to people who submitted to a game jam, for instance, but so far as I know most of us are essentially hoarding a theoretically infinite digital file. Does this give it monetary value? Conceptual value in general, or just to me? Is it like the comfort, despite your better sense,that your phone unlocks only when your thumb rests on it? Does it make me feel special?

What gives a pop song its value, anyways? They’re broadcasted for free on the radio, streaming services, youtube music videos, the background of ads and piped through shopping malls. If, despite all of this, you feel like you still have to listen to it more on your own time, Apple will allow you to use the file under their endorsed contexts for as little as 69 cents. Yet what goes into a pop song, a guest rap verse, production or beats, ghostwriters and so on, can be extremely expensive. Pop songs’ value lies in their distributed-ness, it always has. Having the conceptual ownership over a popular song (as in, a record label) is not unlike investing in a prestigious but immaterial work of art.

McKenzie Wark’s essay “My Collectible Ass” centers around his role as a facilitator of one of Tino Seghal’s secretive conceptual works. While previous conceptual work was made material through documentations, photos, and licence to repeat the work in other venues, Seghal avoids all of this by having the contract and training of facilitators done only verbally and in person, and no condoned record or photos of these events are created. And yet, already, there were rumors that this information, the ability to recreate such a prestigious and secretive series of events that took place on the central ramp of the Guggenheim itself, could enter the secondary market, be valued, and be sold. The work would be valued much higher than the price of experiencing it, (the price of a ticket to the Guggenheim, which over 100,000 people apparently partook of.) There’s something about being the symbolic owner of the information, controlling how it’s distributed, even if thousands or millions of people can have it.

Pop songs and immaterial or conceptual works of art are not purely arbitrarily valued, either. While the numbers that go back and forth in these discussions may seem ridiculous they show that it is almost… almost unthinkable to quantify the value of these packets of ideas or sentiment that can sell tickets, sell cars, make people think or make people dance. While they’re everywhere, they can also make many people feel like their life or experiences are being addressed directly. But all art can have that power on one person, distributed or not.

Which maybe is why I’ve only talked around what FUCKGAMEDEV’s games are like. The presentation of the work and the way it’s acquired forces these considerations to the forefront where they color whatever you end up experiencing. Does seeing a covert photo from inside an exhibition where taking photographs is forbidden communicate what being in the exhibition is like, or just reinforce that you are not there, not experiencing it?

If someone asked me to share my copy of THISISMYSTORY, I’m not sure what I would do.

Regardless you can read an interview with FUCKGAMEDEV among many others in the first issue of TRASHZINE. You can also see if there are any games currently available on his itch.io page here.