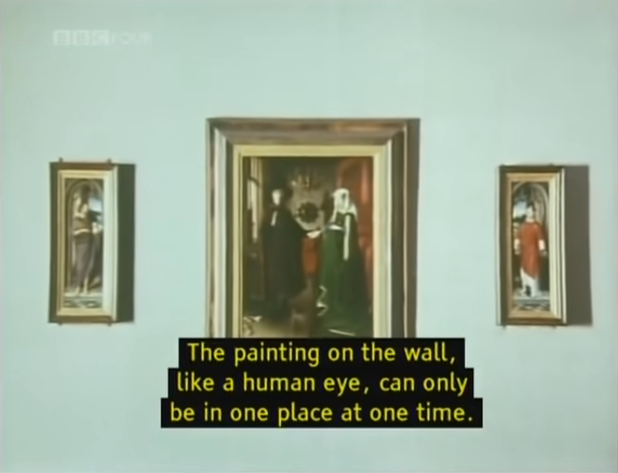 Ways of Seeing is a great series. One of the most interesting things about the first episode is how deftly John Berger deconstructs commonsense assumptions about the value of works of art, why they are what they are, protected and valuable unique objects around which the entire operations of the art world, artists yes, but also curators, researchers, handlers, critics, viewers, second or third-hand viewers, gift shop workers, janitors, architects, interpreters, and a variety of financiers in the form of investors and philanthropists among many, many other characters, orbit. In the series, Berger painstakingly describes the apparently magical and unique experience of standing in front of, and viewing Da Vinci's Virgin of the Rocks in the National Gallery in London. He's doing this with a sense of irony, as he immediately points out that what truly establishes it's uniqueness and authenticity is the 14 page provenance document for the painting in the National Gallery's catalogue. Naturally, he goes on to note, the provenance of the version of the Virgin of the Rocks in the Louvre is similarly in-depth, attempting to offer a greater compilation of evidence that this one is authentic.

In essence, like many or even most startup ventures, crypto-art related schemes seem aware of a problem, but completely unaware of the existing theory around that problem, or existing potential (though less hi-tech shiny) solutions to it. It's classic "reinventing the bus" syndrome. In the case of crypto-art, a lot of these initiatives seem like they're trying to reinvent the concept of provenance, maybe in a way that is executed more automatically and more oriented towards maintaining an argument for the "authenticity" of a digital object rather than a painting or sculpture or whatever. Like many crypto things, it's meant to be better because it does it in a way that eliminates any ambiguity inherent in messy systems like human-to-human communication or fiat currency.

The issue here is, well, I'm not sure this is doing it better than the features of provenance systems we have already. If you can bear to put aside all of the issues that come from using a crypto framework, the environmental cost (or, barring that, finding a way to offset or mitigate the cost in electricity generation and ewaste in a remotely sustainable manner), but also the work being tied down to a particular platform, there's also the issue that the whole thing is a bit tautological. Crypto has value because it says it has value (it has essentially used up a set amount of energy and computing “work” to exist), it's authentic because the encrypted string says it's authentic. Crypto doesn't necessarily restore absolute value, security or trust to currency in the first place, as Max Haiven notes in Art After Money, Money After Art:

“...the vast majority of cryptocurrency, blockchain and smart-contract approaches adopt wholesale neoliberal approaches to money, which is to say they see money as ultimately a neutral tool that naturally develops from human commerce in complex societies. Their explanation for the pathologies of today’s economy is that nation-states or powerful economic actors have skewed, controlled or perverted money’s neutral nature, offering us instead politically-manipulated tokens in the form of central-bank issued fiat currency. The gambit of most cryptocurrency schemes is that by “returning” money to its origins we could therefore return society to its rightful path... Money has never been a neutral tool, and certainly never under capitalism. ...While many cryptocurrency schemes and visions pose themselves explicitly against what I have here been calling financialization, I would posit that the vast majority are in fact symptomatic of the financialized imagination. In their (cruel) optimism that a new distributed, cryptographically enhanced system can restore money to its fabled neutrality and deliver us the virtues of transparency, autonomy, security or decentralization they end up participating in and reinforcing the encryption of sociality by money and finance.”

So what is crypto art for? I think the justification of crypto art schemes is illuminating wrt what problems we're interested in solving, and also the trade-offs we're willing to make in the process. To return to the initial example: If, speculatively, we could go back in time and confirm which of the two paintings Berger discusses is somehow “the original” and somehow “the copy,” (terms which, admittedly, might not straightforwardly apply to the paintings' actual historical context given the contemporaneous workshop system and lack of IP law) would the art world be better for having definitely solved this problem? I'm not sure. All of the knowledge generated by these duelling positions, on the history of art collecting and how and why it changed hands (and whose hands they were), would be replaced by a single cryptographic string that goes through a set of anonymous transactions. Certainty eliminates context and nuance, an understanding of history and value we have to grapple with, instead offering too easy answers that aren't really that useful.

Many of the crypto art markets that have subsequently emerged have tried to differentiate themselves in terms of also offering a benefit to artists beyond ensuring the authenticity of their work, in a time when margins on art funding are consistently thin and success becomes ever more stratified. There is the sense of entering a new community, accessing a previously untapped market, or even getting contracted payments on every subsequent sale of your work. Of course, it requires fealty to the platform and turning yourself into a sort of blockchain evangelist, as well as tying your work to that specific platform or market indefinitely, but this is framed as a sort of savvy adaptivity that is prized in the freelance or gig worker. And I'm sure, for a few, there will be modest, and maybe even sustained payouts. Of course, this will be nothing next to what speculative investors relying on waves of crypto evangelism will see.

In most cases, we already have many of the tools that can potentially be used to make a less hierarchical art world where artists have more stake in their work and its subsequent journey. There's nothing about ensuring artists get a fair portion of every subsequent sale of their work, for example, that can't be done with the old-fashioned tools of provenance, contracts, and human trust. In fact, this has occasionally been demanded or attempted to be secured legally by artists who were increasingly aware of the function art was serving as a financial investment in the post-war period. The sticking point is more often social, these kinds of ideas are difficult to put into practice because they challenge the hierarchical and extractive nature of the art world that those at the top of institutions, cultural, legal and financial, scaled or were born at the top of. Or as that sort of person likes to say, they are "unrealistic."

Beyond that, the "artificial scarcity" that requires digital objects (which are theoretically freely and infinitely reproducible) to be paid for, or somehow metaphorically “owned” or “leased” through DRM systems and platform-based access, is not eliminated but taken to the extreme when the work is distributed through a crypto-art marketplace. Even if everyone can see the art, or a sort of representation of it, connecting ownership to a unique string that only makes sense in the context of a particular crypto-art market places a series of unpredictable hurdles in its future. Forms of DRM have been the enemy of long-term digital preservation and public cultural access. While artists may make a bit of money on these platforms, given the general instability of both startup ventures and crypto markets, it seems like a gamble indeed to encrypt your own work in this way. Authenticity also necessarily means something different in the digital realm. It's incorrect to say that digital files, in their freest and most replicable state, lack provenance simply because there are many of them. As they age, qualities like their format, size, content, context and compatibilities all speak to moving through history in the same way as a physical artwork, and require historical attention and preservation practices all the same, whether it's a file that has only one copy or one hundred thousand.

Then there's the added problem that crypto-art platforms almost always offer a new site for cultural commerce without fundamentally challenging the extractive and individualizing structure of the art market. You have to enter all of these “opportunities” as an entrepreneur, never as a collective or even merely a single artist. Are there any cases of these platforms leading to broadly more sustainable artistic practices rather than just a few flashy large payouts for media-savvy big names or early adopters? The hype of a technological magic bullet is easy to spin out into a white paper or press release, but many of the collective demands that would truly nourish art-making and solve many of the problems artists face, like free art school or UBI, don't play into the glamour of the individual art star, even though this figure may be concealed by progressive-seeming language or graphic design. Unfortunately, they'd be good for everyone, and therefore are unthinkable.

So to sum up: physically-substantiated art objects become interesting not only in terms of their specificity and value, but because they are a strange type of witness to history. The record of their provenance, the analysis of their style, the chemistry of their patina, and so on, does not only confirm authenticity and therefore value; they are a corpus of historical information that is drawn forward, through conservation, research and provenance documentation, to continue to inform artistic and expressive production broadly. Digital art objects, on the other hand, are freely replicable and distributable in a highly flexible way that challenges ideologies of scarcity and ownership. Crypto-art marketplaces thus far remove the nuance and flexibility of both, while only offering an inadequate, individualized entrepreneurial “solution” in return.

This is not to say that the art world as it exists has already solved or is working towards solving many of its problems. As I noted above, those who wish to “reinvent the bus” sometimes have identified a real problem. However, the broader historical and social context of why, for example, a city's bus system may be decrepit and inconvenient to use, or why even the most bare bones public transportation doesn't reach many places, is usually lost on them. Capitalism has hollowed out both a sense of commons and budgets for public services throughout most countries, and shifted most things towards individualized financial risk. Solutions need to think bigger than just placing this individualized risk on a different stage, or letting the market operate through a different medium to be convincing, crypto or no.

Provenance is a technology! Trust is a technology! Currency is a technology! Capitalism is a technology! And as humans we have the ability to select different tools to perform different tasks; this is technology. My main argument here has been that any problem which crypto-art platforms present themselves as a tool to solve is a problem they only solve poorly and/or partially. Of course, there is no Universal Perfect Tool and bringing about an equitable and sustainable art world will require much cooperation and many tools. I am sympathetic to the ways in which the attitude of “move fast and break things” mirrors the urgency, iconoclasm and idealism of the artistic avant-garde, but it's not a mystery to see where these things often lead and they're very rarely truly new. Especially in a time where the gap between a successful minority and struggling majority has never been so large, and where we also don't have all the time in the world to reduce our energy consumption at a broad societal level and move what we can onto clean energy sources, I think it's fairly obvious we need to be reaching for different tools.