Most iconic images of cosmologies are based on the Ptolemaic view of the universe, that is, earth at the center, and include a human figure as some sort of point of reference, as if an individual human is relevant enough to the entire system of the universe to have to appear in a diagrammatic representation of it. But of course we are, because we are what’s understanding the system. Above or below, everything is mapped by its scale and perceptibility in relation to a human being. The geocentric model of the universe and the ladder of being model are sometimes even depicted together, blending, superimposed. They fall on each other naturally because mankind is in the dead center of both. Man as the measure of all things, and in all things because all things are measured by his relation to it.

The state of monarchy is the supremest thing upon earth, for kings are not only God’s lieutenants upon earth and sit upon God’s throne, but even by God himself they are called gods.

Playing a simulation by tweaking variables and input is a sort of Divine Right-like position. Above the basic inhabitants of the world but still held by it’s rules. While the developer has defined certain parameters, the player is the one that acts and determines what happens within them. These games have a sort of cosmology because they are also aspiring to be worlds and (usually) aspiring to be understood.

Terra-doodling in simulation games, drawing faces in the tilesets, sneaking in a photo of your wife, these are all points at which players or creators try to impose themselves into the simulation more than the invisible hand holding the cursor. God made in his image, after all, and so do we. It has a certain affinity with the earliest cave paintings and glyphs, often just basic representations of a hand or face, and is the inverse but related phenomenon of the Makapansgat pebble, perhaps. It’s a two way street, we look for meaning in our image and impose it that way as well.

When we look for meaning we tend to look for patterns that center our role in the situation. There is always us and not us, and by comparing the two we know what we are. This sort of inescapable condition has been the starting point of these attempts at cosmology, world-system, simulation, etc in which humans are somehow a variable, and mirrors the systems theory definition of information as “any difference which makes a difference.” But the perception of difference is always from a human (or machine made in the service of human goals) viewpoint and limited in that sense. The hierarchical ladder of being that separates man, nature and the divine is really not so different from more contemporary views of an ecological world-system where our unnatural disruption of nature is what destroys its otherwise ideal balance. These systems are the fantasy of perpetual motion machines made into other ideas, but still the same at the core. Something that can be balanced and go on forever in harmony, a quantifiable system. A game to win.

George Van Dyne tried to find the underlying quantifiable system of an ecosystem by hunting down every possible piece of data he could insert into a computational system, like how many bites of which plants deer took, and in what order. And when all these equations didn’t produce the expected harmony, he went into smaller and smaller data points that could provide it. The difference that made a difference was always one level deeper, surely. The data never produced the simulation outcome he wanted, one that supported the idea that humans were acting upon an automatic and harmonious system. That idea turned out to have no evidence in the end, but it would have made a really fun game… 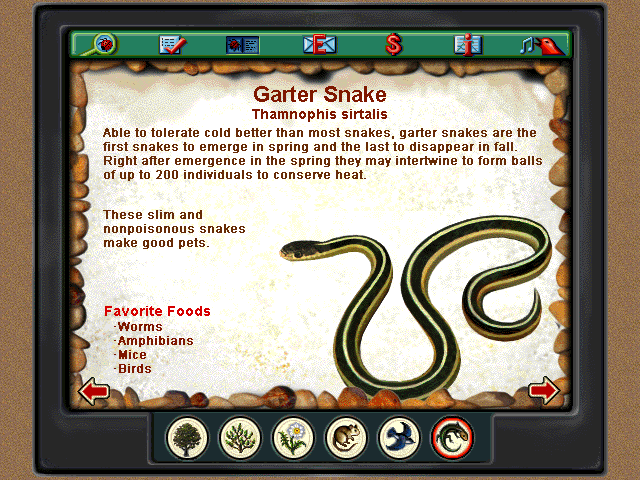 I’ve always wanted to create a snake machine, and in its ideal form it’d be an environment in SimPark that would hold steady at the maximum amount of snakes a park could hold, with every other feature in service of a system that resulted in snake equilibrium forever. And hypothetically it can be done, since the park itself is presented as a closed system to balance. My fantasy of a perpetual snake motion machine is possible in this context, where a snake is just a collection of values and behaviors, and I’m king of the snakes, with no unpredictable outside influences acting upon the demarcated square isometric view of Snake Zone. (Ominous category “disasters” can be turned off after all.)

Sometimes I wonder if I’m actually more interested in the concept of simulation than I am in videogames in general. But on the other hand, videogames function in culture essentially as simulations liberated from any sort of practical requirement to accurately predict or mimic ecology or economies. They’re sort of the id of systems, how we’d subconsciously like them to work or like to believe they work. Fussy discussions about flow or purity, vicious forum arguments about competitive gaming meta, take the existing systems for granted, buy into them as balanced somehow in a way that should make sense, should reflect some connection to reality or a platonic ideal or some sort of ideologically charged goal that seems natural. Everything that intrigues me about systems is when they go wrong, when their lack allows for something bizarre and perverse, revealing the subjective formative principles of the system in the process.

So leave a comment if you have any ideas about how to achieve Perpetual Snake Machine.