Home > Writing Portfolio > Hidden in the Walls of this House: Perspective, Absorption and Direct Address in The House in Fata Morgana 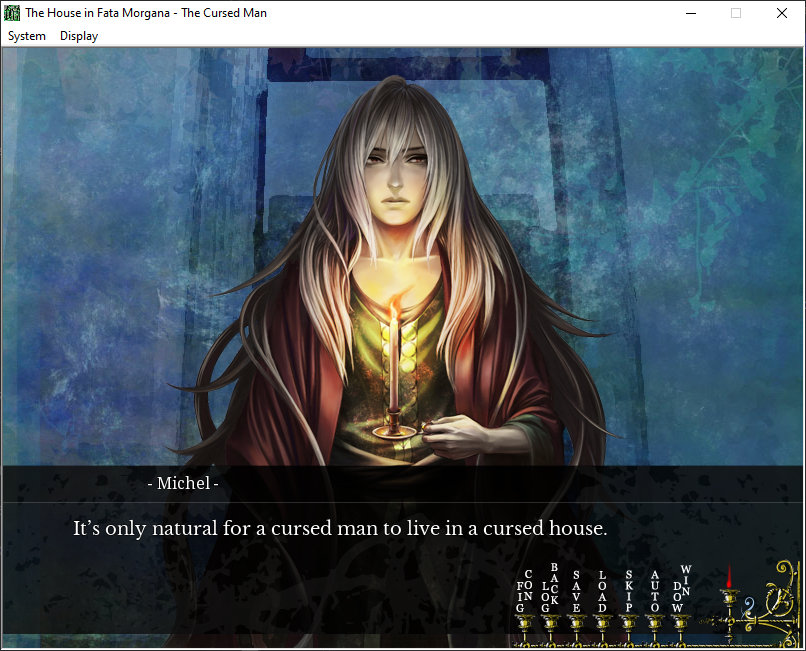 “Don’t be afraid, darling. It’s only a man’s apartment!”

The House in Fata Morgana is an atmospheric and twisty Gothic drama of a VN, with multi-generational curses, vengeful witches, creepy maids, destined lovers, mysterious transformations, cycles of revenge and gruesome demises all taking center stage. Throughout the narrative, the player also takes on a variety of shifting and sometimes ambiguous perspectives. In fact, it begins with you waking up by a dying fire in the titular house's hearth, with little idea of how you got there or even who you are. Fortunately, The Maid is there to guide you through an outsider's view of four tragic tales that took place on the grounds of the house, mysteriously stretching across eras and continents.

But to what end? While each story is absorbing, emotional, and the bones of a cyclical narrative that involves the cursed nature of the house gradually begin to emerge, it remains unclear both who The Maid is addressing these tales to, and why. In this Visual Novel, the agency of your character matches the agency of this apparently forgetful and weary figure, which is to say, you don't get much in the way of choices or action at all for much of the first “part.”

There's eight chapters of Fata Morgana's main storyline, and it is structured mainly around a pretty specific twist and shift in perspectives at the halfway point. Until that point, the vaguely-defined perspective character mostly recedes into the background as a witness to The Maid's tales. Yet the fourth story sticks, sort of skipping and repeating like a broken record. It's almost too abstract, too pure, too didactic, unlike the tales of all-too-human folly and betrayal that came before.

For a hint on how to progress past the end of this story, rather than just looping around to be told the tale again, you have to look in a place that is totally unexpected, but also totally normal. The backlog function, common to many Visual Novels, allows you to read back over the text you have recently advanced. It's the sort of architecture that becomes everyday and invisible to players of the genre, but in this case, at moments of the greatest perspectival and emotional absorption-- for example, when we see from the point of view of Michel, our own hand reaching out, but not placing our cursed touch on, the White-Haired Girl-- the back log talks back, obliterating the content of the characters' speech and providing its own wicked commentary. 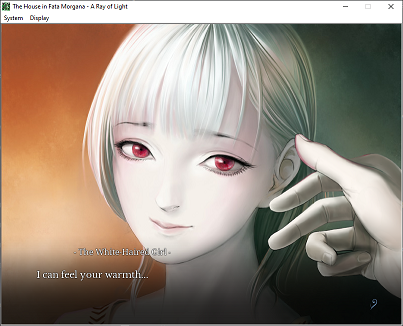 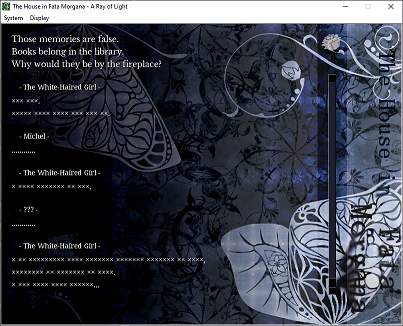 It's a moment that surprised me with its formal inventiveness when I discovered it, and also a moment that deliberately plays with the idea of first-person identification and direct address as it manifests in videogames, interactive and prominently visual works. Of course, when the VN raises the question of who is actually hearing these stories, and who is relating them in the first place, the meaning of all of the stories up to that point are both disrupted and gain an extra layer of significance, as new roles and agencies in these events become apparent.

One day, I turned to see my partner laughing hysterically at his desk. When he composed himself enough to show me what he was laughing at, it was this recording, made to accompany a short lived TV series from the 1950s which featured Renzo Cesana (who also came up with the concept) in-character as “The Continental,” an over-the-top European gent who would schmooze and flirt directly with the camera. It lives on primarily in parody, and, based on contemporary writing about it, is generally framed as one of many flop responses to the presumptively eternal question of “what women want.”

It reaches people's consciousness, then, in many of the similarly-mediated ways visual novels do. There's an obvious formal comparison here to dating sims as a subset of VNs and tie-in CD compilations of beloved voice actors delivering additional lines directly addressed to the listener. But beyond the explicit topic of romance or companionship in general, this short-lived TV series is an interesting historical artifact of two common tropes in videogames, first person perspective and direct address, working together and occurring in a space that has been scrupulously excluded from the remit of “Game Studies.”

When we think of first person perspectives appearing in films, we can consider it a result of influence from the aesthetics of videogames, especially when they occur along other signifiers (like shooting) or direct reference to or adaptation of a videogame. But there are also precedents from before interactive, simulated 3D environments, and which go beyond simply opting for an interesting “perspective shot,” in how they directly incorporate the viewer. Historically, the promotional rhetoric of videogames has often pitched them as the moving image, but better, which usually functions as a sort of radical break where visually-oriented forms of analysis are secondary to an analysis of systems, rules, or actions. But maybe they've been operating along the continuum of representation in general, from the imagined space of a Renzo Cesana album or drama CD, to variety and talk shows, to dating sims, to the unnerving way NPCs turn their heads to make the prescribed eye contact for “immersion.”

Erkki Huhtamo identifies automated machines entering public life, from pinball tables to cigarette vending machines and kinetoscopes, as an important technological prehistory of video games that is often ignored in favor of citing “traditional” or “analog” games. And it's true that these are important objects both in terms of presenting push-button interactivity and the pleasures of automation and sci-fi wow to the general public, which are also main elements in the wheelhouse of techniques videogames use to hype up their appeal. But can there be additional pre-histories of videogames?

The prehistory of first person perspective as commonly conceptualized in games is primarily continuous with the history of euclidean perspective. Renaissance paintings that use these perspectival caluculations are all first-person (by videogames' standards) in that they are expecting the viewer to occupy a specific vantage point, and simulate a space moving out from that perspective. Because this representational style was codified in mathematical principles, it became the most straightforward way to simulate vision in a digital environment, and because of its connection to enlightenment ideals of scientific objectivity, it also meshed well with the hype around simulation and realism that was also pushing videogames and digital tech in a very specific direction, especially towards military and surveillance ends.

However, alongside visual first person perspective, there is also a just as strong undercurrent of an affective, literary style of first person perspective that defines videogames. It is like the obverse of a mathematically simulationist viewpoint and the sense of “reality” and “freedom” this provides that is often uncritically replicated across games. It's difficult to let these two nominally “first person” perspectives hang next to each other, because their effects are quite different. The implication when you're playing in a “first person” or near over-the-shoulder perspective game which primarily involves moving through 3D space is that you are acting “as” the character, but the experience can just as much feel like piloting some sort of vehicle or using a tool. First person perspective and direct address as one of the visual languages Visual Novels use, however, becomes a highly computationally-economical way of involving the player in potentially non-linear, multi-perspectival digital environments, narratives, and relationships.

So, like Huhtamo's automats, and Fra Carnevale's Ideal City, can we also consider “The Continental” videogame pre-history? And what do these two things have to do with each other?

“The Continental” is a strange moment of the affective first person perspective hitting a certain critical mass; it was beamed into homes across the US every Tuesday and Thursday evening for a brief time. It's also something that is looked back upon with a high degree of cringe, it's mostly preserved in the public memory through spoofs in Mad Magazine and SNL. While first person shooters and a variety of other first person or just-over-the-shoulder adventure games utilize a high degree of technically sophisticated simulation of 3D space and depth, working towards immersion and identification with the acts presented in the game space, a lot of times, the literary or visual experience delivered addressed to the player is something about who to shoot at or how many rat pelts to collect, with occasional hammering on Theme or Exposition monologued at you. Even if it's a bit, or a lot, corny, there's something that is more intimate and emotionally attuned about the non-systematic, non-instrumental ways of addressing someone seen in “The Continental.”

The House in Fata Morgana, like many VNs, seizes upon this intimacy, and stretches it, and turns it inside out, almost as if it's testing out just how much it can do with its “limited” format. Perspective is wielded with cleverness throughout Fata Morgana, as character motives and identities have to be concealed or shifted depending on the time period they're occurring in, and the player's identification and emotional attachments to these characters are similarly toyed with to heighten suspense, surprise and emotional impact, as well as just tell a very good twisty Gothic yarn. These games can make active use of the indeterminacy of identification, perspective and address that a digital medium like videogames can provide, and yet Game Studies, as a framework oriented towards methods for simulation and system-oriented works, is often resistant to even talk about videogames that don't fit this model. This priority has become the invisible architecture of thinking about videogames, and, moving through it without reflection or exploration leads to anything outside of its main halls atrophying, and the entire thing getting caught in a repetitive loop.

“Game Studies” is an unfortunate case of nominative determinism. Studying it has been clarifying in the sense that I now realize my interest in videogames is fairly divorced from my relationship to games, which is usually begrudging tolerance in certain social situations. The study of videogames didn't have to develop in a way that presumed a more meaningful historical continuity with the prestigious old objects of senet, chess and go than the novels, TV, and objects of everyday life that were contemporary to their development, in a sort of evo-psych style fallacy that wants to claim its place as an eternal presence on a long arc of history without actually getting into the nitty gritty of historical details. Despite the resistance to anything beyond a perplexing citation of Duchamp's readymades at best in many texts that make a valiant effort to grapple with the question of games being art with as little interest in what art has been or done in the past as possible, art historical frameworks for puzzling out the meaning of things like perspective, representational styles and direct address are really useful here, I swear! That Fata Morgana absorbed and toyed with me so, and that “The Continental” feels strangely videogamey, both point towards this possibility.